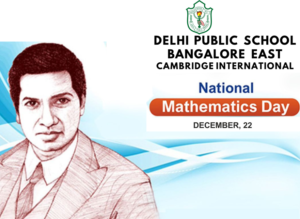 The students presented multiple activities including a musical dance about shapes and a short and sweet skit about numbers. Different types of Numbers like Natural Numbers, Whole Numbers, Integers, Rational , Irrational and Real Numbers were explained using song and dance.

In the assembly, interesting facts about maths were displayed , uses of maths were presented , and an easy way to recall tables of 19 was revealed.

At the end, a fun and interesting maths quiz was held by some students.